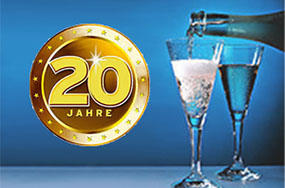 Kithara Software, leading real-time specialist for industrial applications, celebrates the company’s 20th anniversary. On this occasion, founders, employees, customers and business partners take a look at Kithara’s past as well as the future development strategy and thematic focus of the Berlin software company.

Since the founding in 1996, Kithara Software has emerged during the past years as one of the most important brands for real-time under Windows. The company has thus become one of the key actors in the utilization of Windows-based applications for sophisticated industrial projects. Beginning with tools for hardware-dependent programming in the early days, the development of real-time Ethernet drivers has directed Kithara’s attention to the field of industrial automation, which has remained a central focus of the company until today. Through the constant expansion of supported interfaces and hardware, the function library »RealTime Suite« allows for the easy implementation of real-time capabilities in an increasing number of industrial fields of application.

In more recent years, the two fields Machine Vision and Automotive have emerged as rather specialized areas of development at Kithara. More often than not, the use of industrial cameras requires a real-time reaction to captured as well as processed image data. As for automotive engineering, it is the increasing implementation of complex software-based car functions that makes the implementation of “hard” real-time capabilities, for example in test systems, often mandatory.

Due to the fact that for many industrial projects the significance of real-time capabilities is still on the rise, future developments of the »RealTime Suite« will continue to incorporate additional fields of application.