Kithara Software has existed successfully for 20 years now, accumulating a lot of histories and experiences. However, in order for us to be as time-efficient as our software, we will present on this page a concise overview of the company's core developments that are especially relevant for the current state. 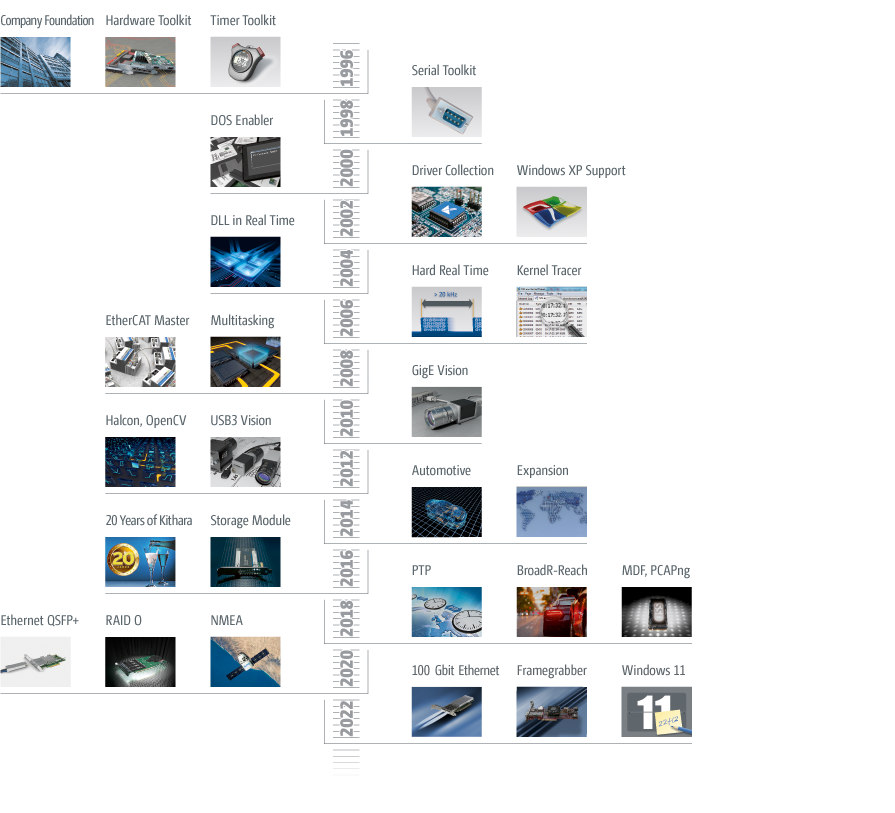 The first steps of Kithara were developer tools for hardware-dependent programming under Windows 95. The “Hardware Toolkit” allowed for the development of device drivers through access to I/O ports, physical memory as well as interrupt handling. With the “Timer Toolkit”, it was possible to implement high-resolution timer routines at kernel level.

The “Serial Toolkit” provided real-time serial communication for all available COM interfaces, now also on Windows NT. Even though the toolkits mentioned above are not supported by Kithara anymore, a lot of their functions have since been partially incorporated into the modules of Kithara RealTime Suite.

The first version of Kithara DOS Enabler allowed for pure MS-DOS applications to run on Windows operating systems. Thanks to the absence of virtualizations, DOS could also be utilized with real-time capabilities. 15 years later, due to popular demand, the most recent Kithara DOS Enabler has made this functionality available for modern Windows systems and also added greatly improved real-time performance.

Available even today, Kithara Driver Collection combines the different developer tools for hardware-dependent programming and provides them in a heavily optimized bundle. Also starting this year, Windows XP ranked among the list of supported operating systems.

The structure of the Kithara real-time system was revised completely in 2004. This included an entirely new sample concept, the rework of the setup as well as the possibility to load a DLL into the real-time context in order to execute application code at kernel level.

With the development of high-frequency timers, the guaranteed reaction times of Kithara RealTime Suite was drastically improved, up to “hard” real-time capabilities. With timer frequencies of more than 20 kHz, a maximum jitter of just a few micro seconds could be achieved. Also developed in 2006, the Kernel Tracer, even today, represents the most important resource regarding error analysis as well as debugging, for Kithara and customers alike.

Kithara’s popular network drivers for real-time ethernet communication are among the most crucial developments in the field of industrial networking. The subsequent creation of the EtherCAT Master ranks as one of the central elements of Kithara RealTime Suite today and represents the company’s major venture into the field of industrial automation. At the same time, the Kithara real-time system was extended with a high-performance multitasking environment. For the first time, Kithara RealTime Suite, as a priority-base preemptive multitasking system, is now equal to a pure RTOS regarding performance and function range.

In 2010, Kithara begins to point its view towards specialized industrial fields, such as machine vision. For the immediate capture of image data with industrial cameras, the gigabit-ethernet-based interface GigE Vision was now supported as part of the real-time extension.

After the topic of image capture, image processing in real-time was the logical consequence. With the support of the image processing library Halcon, and later OpenCV as well, immediate control reactions to incoming image data can be applied. Meanwhile, the development for USB3 Vision cameras was started.

With automotive engineering, Kithara entered another large industrial field. Real-time capabilities of the automotive bus systems CAN FD, FlexRay and LIN are mainly aimed at test system manufacturers and suppliers, who need to meet the requirements of an increasing automotive networking. In order to fulfill the growing demand for Kithara products, the first international representations in the USA and China are formed.

Kithara popped the corks in 2016 and celebrated its 20-year anniversary. Likewise, Kithara RealTime Suite also celebrated a jubilee with the release of Version 10. This new version brought along a number of crucial changes that would make the real-time system much more future-proof as well as customer-friendly. Furthermore, the new Storage Module introduces a high-performance function for big data management, which allows for the implementation of extremely demanding applications in fields such as image capturing or measurement data storage.

The support of PTP is implemented, which allows for network participants in a distributed system to be accurately synchronized, even world-wide, and to be controlled in real time with Kithara RealTime Suite. Thanks to years of expertise regarding Ethernet, Kithara was able to add BroadR-Reach to the list of supported automotive interfaces. The physical transport layer for Automotive Ethernet is considered particularly future-proof. Based on the Storage Module, the implementation of the measurement data standards MDF and PCAPng was successfully finished. This potentially paves the way for applications in the field of Big Measurement Data with real-time requirements.

Always a pillar at Kithara, real-time Ethernet now also allows for throughput rates of up to 40 Gbit/s by using QSFP+. The rapidly evolving field of data storage is enjoying a multiplication of read and write speeds thanks to support for RAID-0 functionality. For the first time, the company’s real-time system is venturing into the field of machine learning by involving various software libraries that provide algorithms for programming complex self-learning applications. Additionally, time synchronization is further extended by the simplified profile gPTP as well as GPS functionality with NMEA.