Kithara is Reaching for the Stars 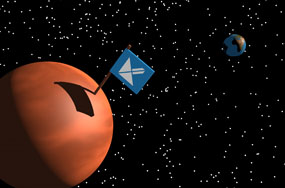 Kithara is now an official supplier of the first manned mars mission. Our company participated in a public tender for the IMEM (International Mars Exploration Mission), searching for the best communication solution. The background to this are problems resulting from the long distance between Earth and Mars. The distance is currently about 270 million kilometers, so a radio signal would have to travel for about 15 minutes. This poses a serious problem as the mission control center on Earth cannot react quickly enough in the event of unforeseen incidents during the Mars mission. A distress call from Mars takes 15 minutes to reach Earth, with the response taking the same amount of time, in addition to valuable minutes of discussion and decision-making on Earth. A whole hour may pass, even in life-and-death situations.Planet Mars is not particularly known for its habitable environment. Temperatures can go down to minus 120 degree Celcius, the atmospheric pressure is equal to the Earth's atmosphere at an altitude of 35 kilometers, and the atmosphere consists of almost 96 percent carbon dioxide. Fast communication would be absolutely necessary for survival.

This is where Kithara RealTime Suite comes into play. Exclusively developed for IMEM, the Precomprime Module allows for fast, instantaneous communication in real time. All signals, for both audiovisual communication as well as system control from Earth, are condensed to 0.05 percent of transmission time originally required and thus gain a time advantage of over 99.95 percent. Transmission time is reduced from 15 minutes to about 0.0075 seconds, better than many mobile phone connections on Earth.

The determining factor in the commission's decision in favor of Kithara was mostly the relatively low acquisition cost. While most custom-built hardware components of rockets, habitation modules and research labs can go up to the upper billion range, the Precomprime Module only costs 999 euros plus the hardware costs for a medium equipped PC.

The Precomprime Module is also available for "regular" Earth inhabitants, although the time-saving effect would probably turn out to be limited due to the relatively small distances on Earth.

UPDATE: Unfortunately we have to announce that the development of the Precomprime Module has been stopped for the time being. In the early evening hours of April 1, IMEM decided to abandon the communication acceleration project in favor of more comfortable toilet seats for the astronauts for cost reasons. The comission subsequently disbanded irrevocably.