The Automotive Future with LIN 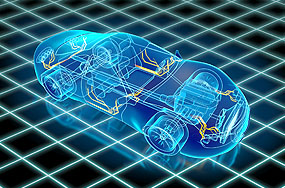 Kithara Software, specialist in the field of real-time solutions for Windows® operating systems, has announced the completion of its real-time LIN bus module. As a popular serial network protocol commonly used in automotive engineering, LIN is deployed for increasingly complex automotive applications to be integrated cost-efficiently.

The implementation of the Local Interconnect Network into the real-time extension »RealTime Suite« presents a natural and logical step for the software developer. LIN particularly features the inexpensive integration of electronics in single car parts, including doors, car tops, air conditioning systems, mirrors or wipers.

The cost-efficiency of LIN is based on the utilization of the low-cost UART protocol as well as single wire networks that are applied as line topologies allowing for significant less weight and cost.

Automobile manufacturers, car parts suppliers as well as producers of test systems rely on specialized software solutions to be seamlessly compatible with vehicles’ electronics in order to effectively develop and test complex and modern automotive structures. As a consequence, high-precision measurement, control as well as diagnosis of LIN networks require an external software interface, such as the LIN module by Kithara.

Uwe Jesgarz, Managing Director of Kithara Software GmbH explained: “The simplicity and efficiency of LIN make it an appealing wiring variant in automotive electronics. In order to meet the high production and testing standards in the fields of automobile development and quality assurance a high-performance real-time LIN module is required for the economical and reliable integration of LIN.”

Due to the fact that LIN is primarily used in cars’ subsystems, it needs to be linked to a higher-level backbone network, which is why the LIN master node often represents the gateway to a real-time CAN bus system as well. Programming can be done in C/C++, Delphi and C#.