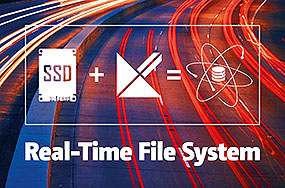 The real-time functions from Kithara have been an integral part for many sophisticated measurement applications for quite a long time. The Storage Module allows SSDs to run with read and write speeds of several GByte/s and well above via the NVMe interface. It therefore perfectly complements testing systems that require the capture and processing of large amounts of data in real-time. Furthermore, with UDF, an efficient data system is provided, which also enables the optimal way to implement packet-writing.

“A major part of real-time applications require the fast exchange of large amounts of information between storage mediums, since they often operate in a field that employ high frequencies and data resolutions. For industrial requirements, the highest possible data rate until now has been severely limited, even with solid-state drives. The Storage Module picks up exactly where previously the storage system has represented the bottleneck within the real-time data communication”, Uwe Jesgarz, managing director of Kithara Software GmbH, explained.

The Storage Module is especially relevant for the field of automotive development, such as for the testing of interactions between several data-based vehicle functions at once. This way, solid-state drives are able to read and write data volumes from multiple data-rich sources, such as high-speed sensors or cameras. This also allows for hardware-in-the-loop processes to create authentic real-time simulation conditions for optimized test results.