FlexRay in the Context of Kithara RealTime Suite. 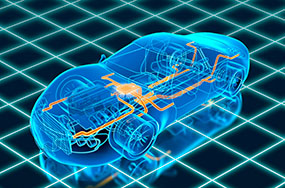 Kithara Software, innovator for industrial software solutions under Windows, has integrated the support of the network protocol FlexRay into the company’s real-time extension. This way, the field bus system, commonly used in automotive networking, can be controlled with hard real-time capabilities, which is often employed in fields such as test system development and the supplier industry.

Following the integration of the automotive protocols CAN and LIN into Kithara RealTime Suite, FlexRay is now supported with guaranteed reaction times within the Kithara real-time system as well.

“Due to the growing networking and extensive digitalization of mechatronic systems, FlexRay is being introduced into an increasing number of technologically advanced automobiles, thanks to its high transfer rate. Real-time capabilities for FlexRay open up the possibility for high-precision analysis of the communication of components and overall automotive systems”, Uwe Jesgarz, managing director of Kithara Software GmbH, explained.

With 10 Mbit/s, FlexRay is especially utilized for high-end functions such as driver assistant and chassis control systems. Using dual-channel wiring, safety-critical applications are able to use one communication channel for redundant data transfer. For non-safety segments, on the other hand, the secondary channel can even be employed to double the transfer speed. Concerning networking, FlexRay supports bus and star topologies as well as a combination of the two. In this manner, the easy handling and cost efficiency of the bus network can be combined with the performance capabilities and stability of star topologies.

Similar to the testing process of CAN and LIN networks, FlexRay with hard real-time is especially important for test system developers. When it comes to measuring and control in this field, precise test results can only be achieved with strictly defined jitter behaviour.