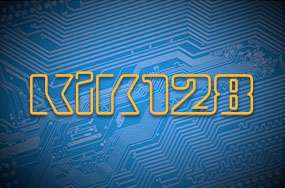 Since 2011, the real-time system by Kithara already has included an operation mode which allows for running 32-bit real-time applications on 64-bit systems. Starting today, this will be expanded on with the new KiK128 Module. The only hardware requirement is an x64-based processor that possesses both the new Ultra-Threading Technology (UT) as well as an Inter-Processor ALU (Arithmetic Logic Unit).

While hyper-threading, which has been known for years, uses one physical core to execute two different threads in near-parallel fashion, the new ultra-threading goes for the opposite approach. Two physical cores execute a single thread and thus double the potential processing width to 128 bit. This approximately doubled computational power is a result of the two CPU cores, which are linked in an ultra-threading cluster, being able to determine on a per cycle basis which one is going to handle the next instruction. Instructions with double width are processed by both cores with an equal share. On the other hand, all vector instructions of AVX units are executed on both cores at the same time (double SIMD) in order to minimize inter-processor communication while increasing the amount of parallel floating point operations. This particularly improves throughput of write-only data pipes.

Doubling processing power also allows for halving runtime of jitter algorithms until the start of useful program code. This in turn can result in a near squaring of network throughput. Additionally, the implementation of the jitter limitation procedure with the machine learning library Dlib promises further advances.

The only drawback is the halving of available CPU cores inherent to this concept. However, according to insider reports, this is supposed to be counterbalanced by hyper-ultra-threading, which is already under development.