Breakthrough in the Predicition of Events 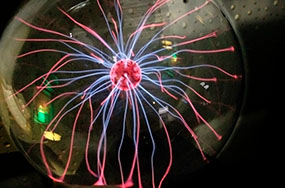 Big Data has become an ubiquitous topic by now. Among other things, it is also about detecting imminent technical problems and taking timely countermeasures by assessing available data from sensors and cameras. While predictions up to now have been based on vague assumptions due to changing values, developers at Kithara, thanks to intensive research in the field of quantum mechanics and its practical application, were able to create a new ground-breaking product that will be able to incorporate temporal dimensions into the assessments as well.

The Kithara-RealTime-Suite-compatible Future Module utilizes a virtual CTC simulator (closed timelike curve) in order to detect unusual events and take appropriate measures. Even though the module also uses available cameras and sensors in order to detect value changes, such values would lie 42 seconds ahead into the future. Due to this foreseeing behavior, it is possible, for instance, to deactivate machines, production lines or robots way before an event can take place and cause damages. This also creates an error message with details about which malfunction is to be expected and which component is going to trigger it. Even accidents, such as in case of tool breakage, may be prevented as the machine is able to warn the operator prior to the occurence of a failure and issue a request to get to safety. Unfortunately, the surveyed period of time is limited to a maximum of 42 seconds since the quantum communication, according to the concept of causality determined by Heisenberg's uncertainty principle, is subject to an insurmountable barrier.

What may read like a sober description at first will actually have far-reaching consequences on a global scale as companies will be able to better protect their valuable investments. This does not even imply integrating expensive hardware upgrades, since the Future Module, similar to a virtual computer, is merely a simulation. It does, however, require a separate processor core to isolate the highly sensitive calculations.

This innovation expectedly will have severe impact on many other economic sectors that are currently not entirely foreseeable. What can be expected is that industrial insurance companies will have a harder time concluding contracts when potential policyholders are able to initiate countermeasures before damages can occur, thus making the need for insurances obsolete.

As usual, the Future Module can be easily integrated into existing Kithara installations.